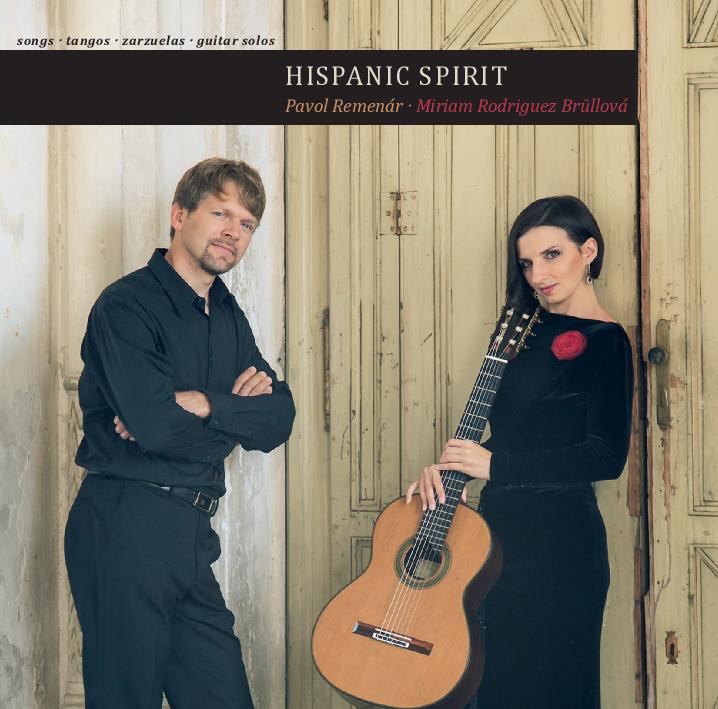 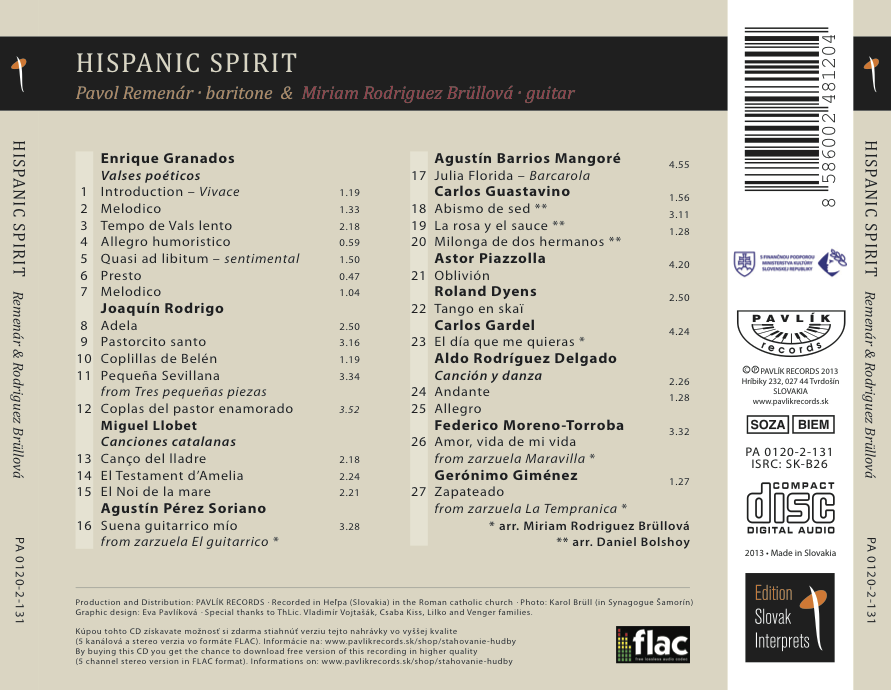 Such a recording has not yet been released in Slovakia. This compact disc will significantly enrich the theme not only of the Slovak listener, but will certainly be interesting on the foreign market as well. Zarzuela as a genre is practically unknown in Slovakia, although it is a significant phenomenon of Spanish operetta. The world’s most important singers, such as Plácido Domingo, Rolando Villazón, Ana Maria Martinez, Teresa Berganza, Victoria de los Ángeles, also belong or were among the followers of zarzuela (the parents of Plácido Domingo were also zarzuela singers). In addition to the arias from zarzuelas, the artists also selected beautiful songs for this recording, which are a jewel of the chamber genre of songwriting. In addition to the original guitars, most of the accompaniments come from guitarist Miriam Rodriguez Brüllová. These are transcriptions of piano and orchestral parts. As far as I found out, most of the songs in this cast have never been and nowhere released. As far as artists are concerned, this is an excellent, proven art set. Pavol Remenár belongs to the current Slovak top of opera art. He often appears on the opera stage of the Slovak National Theatre and on concert stages and spreads the good name of Slovakia abroad. I am convinced that no one doubts the excellent qualities of guitarist Miriam Rodriguez Brüllová, because he proves this constantly at concerts not only in Europe but also overseas. This is evidenced by re-invitations to perform with important symphonic ensembles. In addition to concert activities, Miriam Rodriguez Brüllová is also the soul of the important international music festival Bratislava Chamber Guitar. Previous invitations of the two artists to perform with the program of Spanish music at the opera festival Kutná Hora 2012, at the Festival della Valle Ossola in Italy, respectively. for concerts in Berlin (Konzerthaus), Prague, Helsinki, Belgium, Israel etc. are proof that the release of a CD dedicated to Spanish songs, thongs and arias from zarzuelas will be a great success. 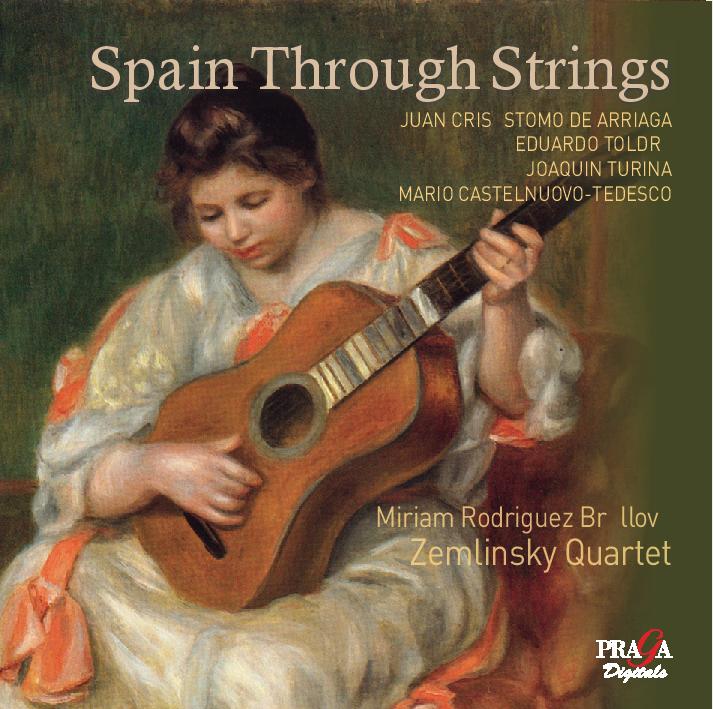 Although the Italian-born Castelnuovo- Tedesco is an interloper in a disc of otherwise Spanish composers, it is his Guitar Quintet that forms the highlight. Already 37, and knowing precious little about the guitar, he met Andrés Segovia, and the friendship that ensued inspired a score redolent of happiness. He uses the instrument in its classical form, without a hint of its Spanish associations.

The young Slovak guitarist Miriam Rodriguez Brüllovâ gives a technically immaculate account that perfectly captures the work’s playfulness, and reveals an abundance of dexterity in the outer movements. There is nothing inherently Spanish in Arriaga’s hugely attractive Third Quartet, a work fashioned from influences handed down from Mozart. Nor do we travel further south than French Impressionism for Turina’s evocative Toreador’s Prayer. But both are welcome, as is the colourful scene painting in Eduardo Toldrà’s triptych of sea pictures for string quartet, which, though stylistically predating its 1921 origin, is a gorgeous score.

The Zemlinsky Quartet achieves a perfect balance with Rodriguez Brüllovâ in Castelnuovo-Tedesco’s conversational passages, would have been welcome. 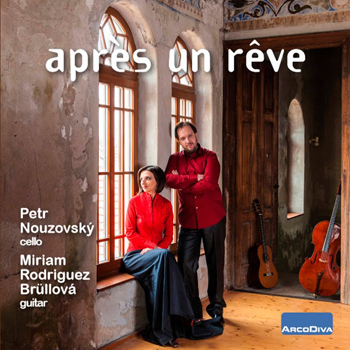 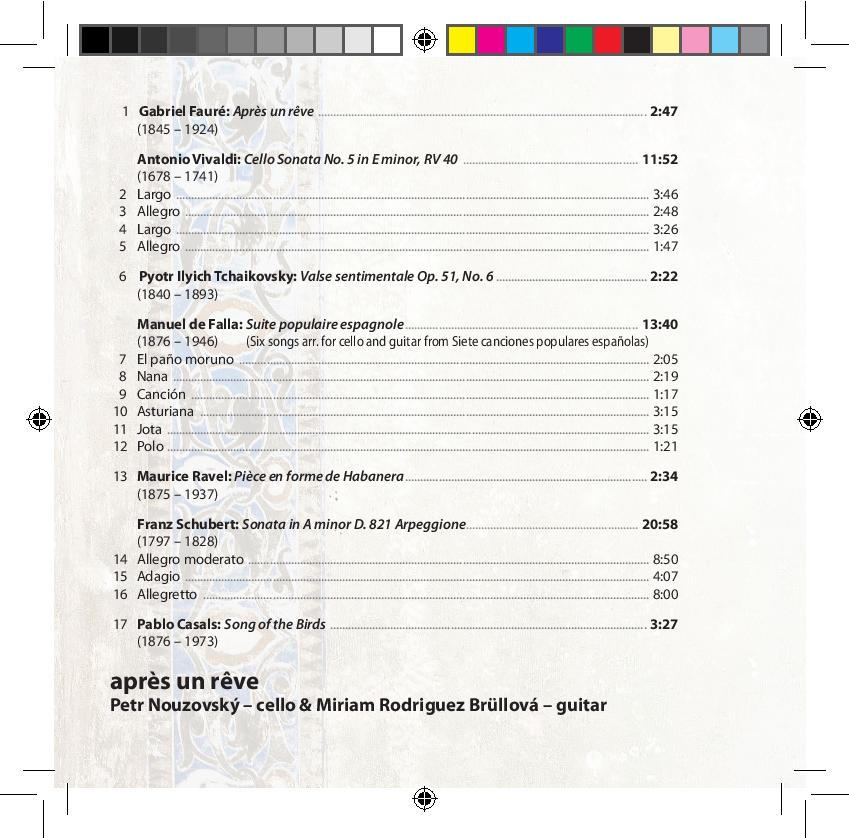 It was during my studies and since the very beginning of my concert career when I dedicated myself intensively to chamber music. Not only have I enjoyed the company on the stage. Playing with other instrumentalists or singers opened new spheres in music for me. I have performed in many ensembles from duos to quintets, in combination with all bowed instruments, woodwinds, piano, accordion etc. My personal favorite combination would especially be with a cello. Both instruments have similar tone range and possess a wide variety of different tone colors and means of expression, ranging from mellow warm silky sound to bursts of passionate sound. After playing with Petr for a while and performing successful concerts in Europe, Africa and Asia we have decided to make this recording. The main question was, of course, the choice of pieces that would suit both of us and would be attractive to you – our listeners. Although there was a very enjoyable repertoire originally written for these two instruments we have decided to select exclusively transcriptions for this recording. These highly acclaimed pieces written by some of the greatest composers of music history have been performed and recorded uncountable. However, the harmony of these two instruments offers different moods, expression and emotion. The transcriptions touch mostly the guitar part, as the original accompaniment role belongs to the piano or basso continuo in case of Vivaldi‘s Sonata. The guitar does not possess the tone range of the piano neither do we have ten fingers at our disposal to produce the same sound. Nevertheless I believe that the gentleness and delicacy of guitar timbre underlines the intimate and nostalgic character of pieces such as Valse sentimentale, Song of the Birds or Après un rêve. Furthermore being a typical Spanish folklore instrument it fits very well to Canciones populares españolas by Manuel de Falla or Habanera by Ravel. 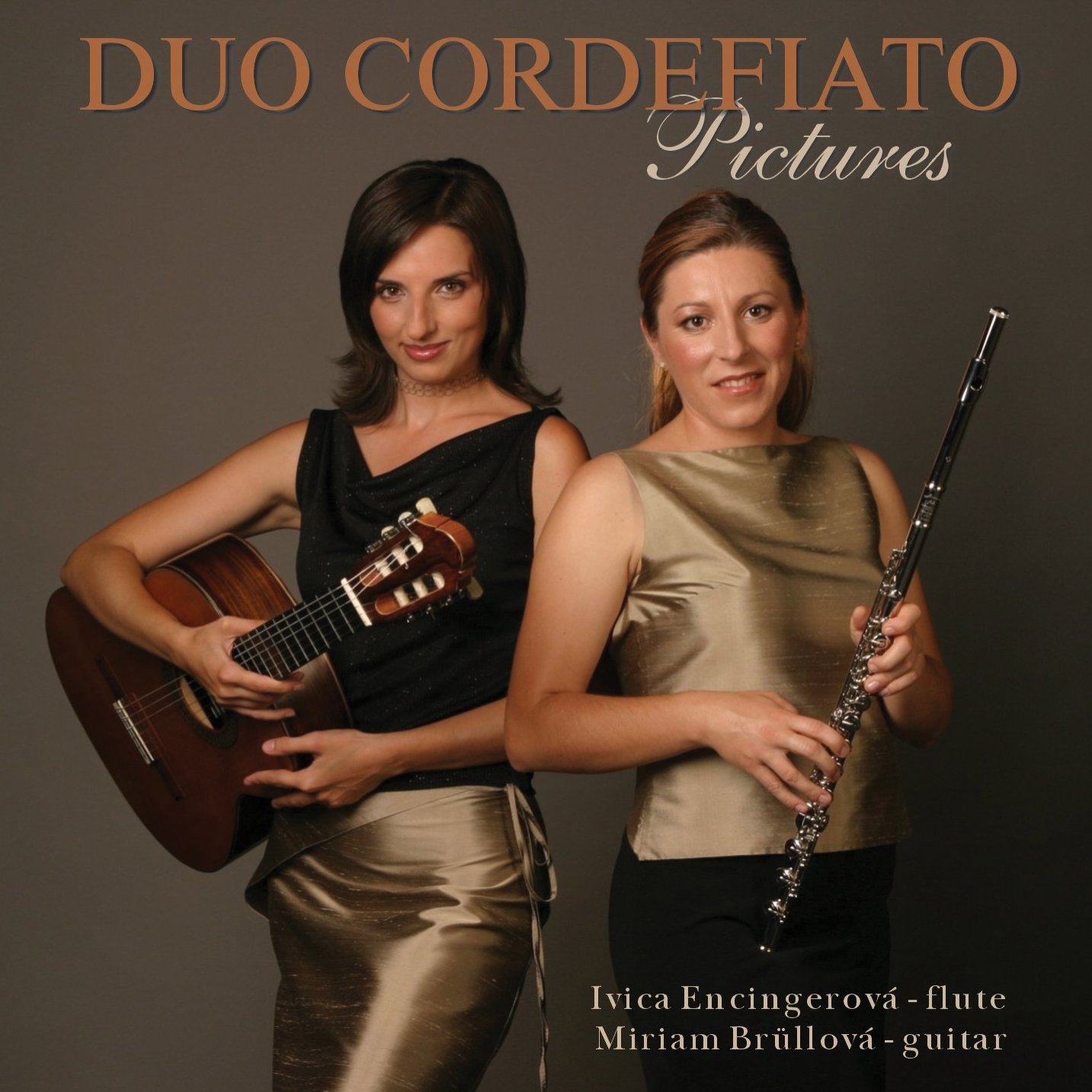 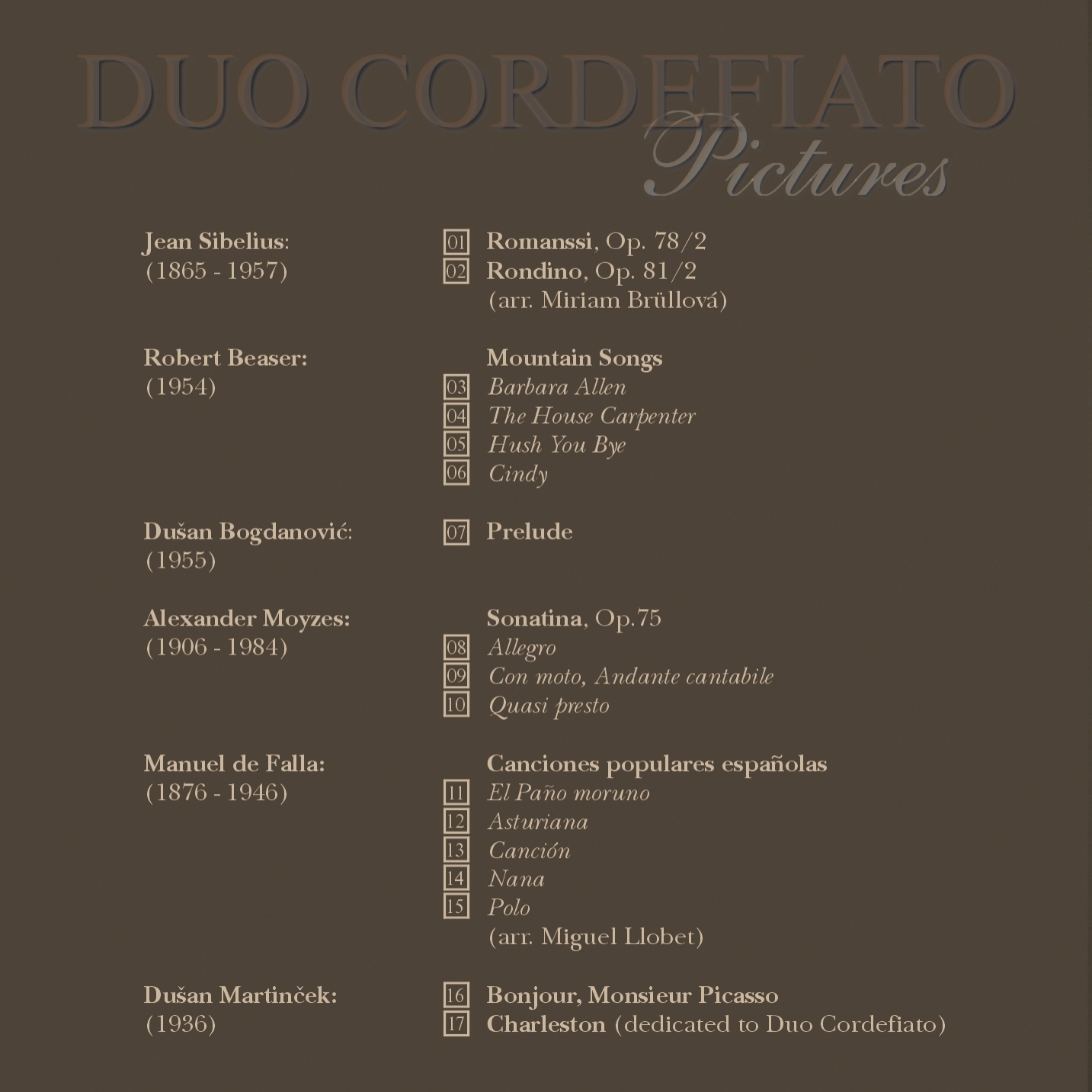 When we selected some of our favourite pieces from the 20th and the 21st century for this CD, we realized that we had turned to the music of the composers who were strongly inspired by the cultural tradition, the musical folklore of the nature of their own homelands. The only exceptions are the last two pieces of the recording a Spanish capriccio Bonjour, Monsieur Picasso and a Charleston. In spire of being written by a Slovak composer they sound truly „Spanish“ and „American“ . Because all these picturesque pieces evoke images of great landscapes, people or nations of the world we named this recording „Pictures“. 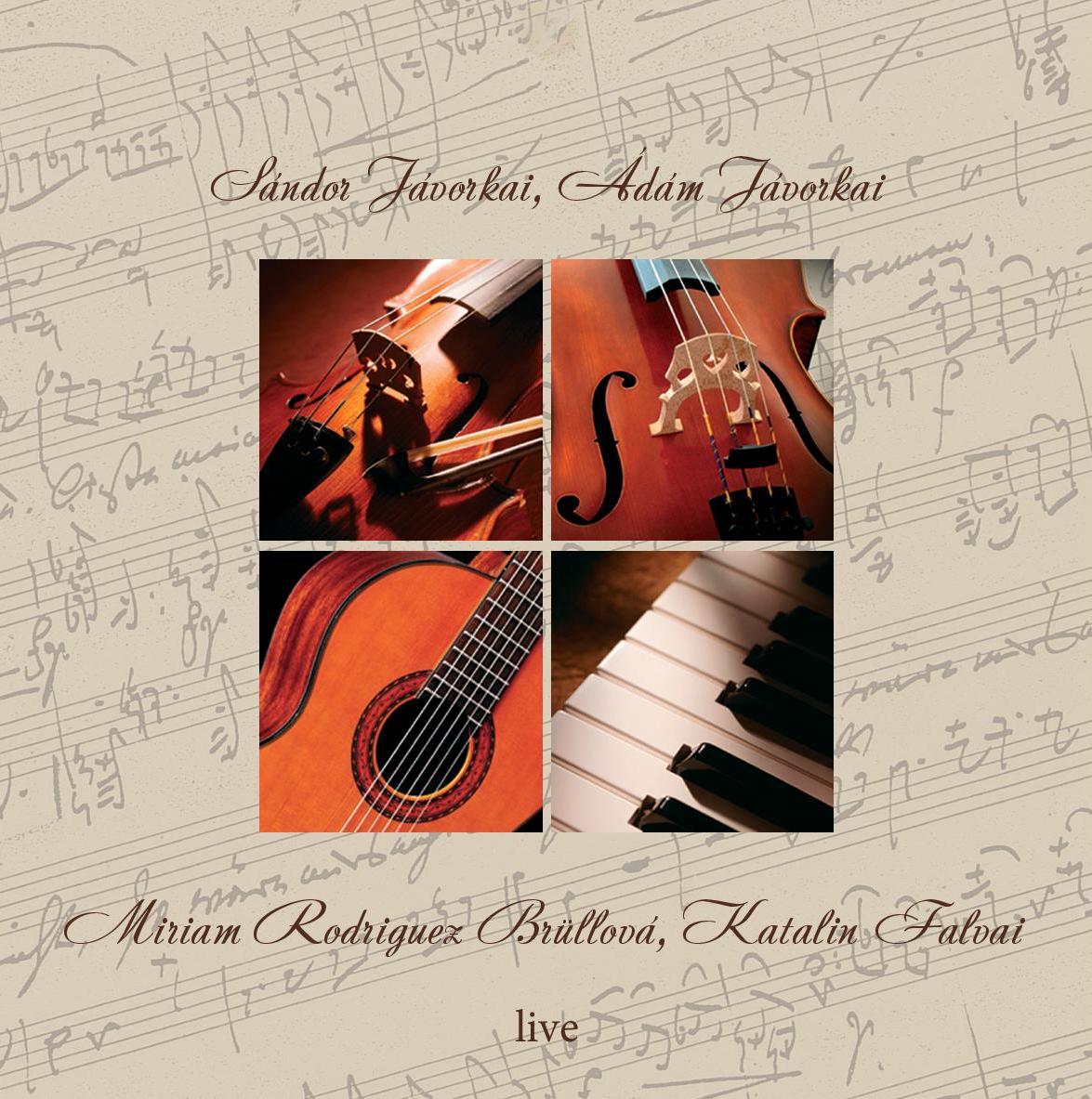