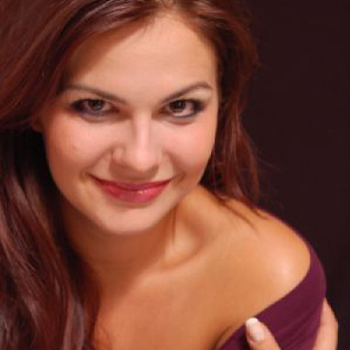 In 2002, at the M. Sch. Trnavský competition, Eva was awarded a special prize for her excellent vocal interpretation of song. In 2004, Eva took first prize in the Imrich Godin competition in Vráble, Slovakia. Eva then began slovak interpretive scenes as the protagonist in many vocal/instrumental pieces from modern Slovak composer Víťazoslav Kubička. In the pastoral messas Znovuzrodenie, Eva performed the main role of Angel. In author´s next piece she sang the part of Katarina von Bora in the opera Martin Luther, and also sang in Kubička’s Requiem in Košice under conductor Peter Feranec and she sang in International Music Festival Smetana´s Litomyšl.

Eva debuted in 2006 at the Opera of Slovak National Theatre in Bratislava with role La Contessa Almaviva in Mozart’s opera Le Nozze di Figaro. That same year she reached the semi-finals at Competizione dell´Opera in Dresden, Germany. Eva appeared again in April 2007 at the Slovak National Theatre singing Echo in the new modern production of Strauss´s opera Ariadne auf Naxos.

The Slovak National Theatre casted Eva for the role of Micaela in Bizet’s Carmen and in Leoncavallo’s Pagliacci as Nedda. In 2011, Eva performed with Mr. David Lomelli and the Bohuslav Martinu Philharmonic Orchestra in the Czech Republic, the Eternal Gospel from Janacek in Janacek Theatre in Brno, and again the role of Micaela in the Opern Air festival in Austria Gars am Kamp.

Eva shined as a gentle Desdemona in Verdi’s Otello casted with conductor O. Lenard. Her concert tours in Spain and France with role Mimi, Mozart’s concert in Istanbul, tours in Japan with Prague State Opera and opening of Donizetti’s L’elisir d’amore in role Adina with orchestra Slovak Sinfonietta Zilina in Korea are just a little piece of her brilliant worldwide performances.

Eva Hornyáková often performs on the stages of the National Theatre in Prague, where she has so far portrayed Verdi’s characters with great success: Violetta in La Traviata and Desdemona in the opera Otello alongside the legendary tenor José Cura. Of the many concerts at which the artist performed, the interpretation of soprano parts in the following works should be mentioned: Dvořák’s Mass in D major in collaboration with the Amsterdam Radio Orchestra under the baton of Serge Baudo (2014), Dvořák’s Stabat Mater performed by the Brno Philharmonic under Libor Pešek (2014), Bruckner’s Te Deum with the Slovak Philharmonic and conductor Rastislav Štúr (2015), as well as performances in Janáček’s Eternal Gospel in Brno, as well as a concert tour in Germany with Gustav Mahler’s Second Symphony under the baton of Heiko Mathias Forster.

In addition to her theatrical operatic roles, Eva is a well-known performer in concerts, both at home and abroad.