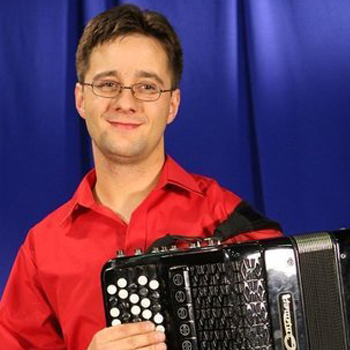 Michal Červienka (1983) was born in Heľpa, central Slovakia. He started playing the accordion at the age of eight. Renowned Ukrainian teacher Lesia Vlachová discovered his talent and provided the first lessons for him at the Elementary School of Arts in Heľpa. Later he attended the classes of Róbert Tatár in Banská Bystrica. He continued at the J.L.Bella Conservatoire in Banská Bystrica under the tutorship of MA Igor Vlach. Michal graduated from the Academy of Arts in Banská Bystrica in the class of MA Vladimír Čuchran, the pioneer of the concert accordion in Slovakia and recently he finished his pre-doctoral study.

Michal is a multiple laureate of many international accordion competitions and the absolute winner of the prestigious contest CITTÁ DI LANCIANO in Italy, set up by Ukrainian accordion virtuoso Vladimír Zubitsky. In a duet with Moldavian cimbalom player Marcel Commendant he won first prize at an accordion competition in Sanok, Poland.

He received diploma of the Minister of Education for the outstanding representation of Slovakia abroad. Michal spent one year at the Music Academy in Lodz, Poland under professor Zbigniew Ignaczewski and received a wide public acclaim as a finalist of a TV show „Slovakia Got Talent“ in 2008.

In May 2011 Michal released his first CD album. With Mária Straková, a soloist of SLUK enssemble and the music band of Štefan Molota he recorded another CD in a folklore genre. He made recordings at the Slovak Radio, Slovak Television and the TV Markíza. Michal often performs at the concerts at home and abroad.

Michal is currently a soloist of a Demonic Violin orchestra of Ján Berky Mrenica. He also performed with the Prague Talich Orchestra, State Opera Orchestra in Banska Bystrica, State Philharmony in Košice, J.L.Bella Conservatoire Orchestra and the Accordion orchestra of the Conservatoire in Košice. With the National Chamber Orchestra held two well-known accordion concerts – R. Galliano: Opal CONCERTO and A. Piazzolla: Aconcagua.

Michal acts as the accordion teacher at the Academy of Arts and the Conservatory of J. L. Bella in B. Bystrica.

Victor Vlasov – A paraphrase on a folk theme