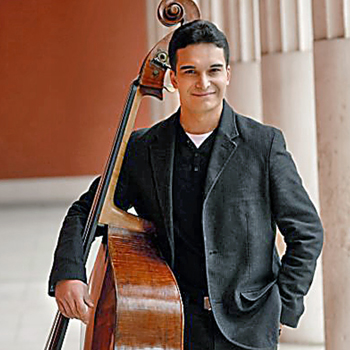 Roman Patkolo was born in 1982 in Žilina (Slovakia) into a musician family. With 13 years he began to study the double bass and 1 year later he was accepted as a student to the Conservatory of Music in Žilina. In the same year he won the national competition of the conservatories in Pressburg and began to study at the University of music in Munich, under Prof. Klaus Trumpf.

In 1999-2011 he was  a scholarship holder of the circle of friends Anne-Sophie Mutter Foundation. In 1999 he won the ISB competition in Iowa City, USA (category under 18) and in 2000 the J. M. Sperger competition in Woldzegarten (Germany). In 2001 he received the European Prize of Culture in Berlin as a soloist and later the European Quartet Prize in Luzern.

The other prizes followed such as DAAD Prize in Munich, Fürstenberg Classics Prize in Donaueschingen, Germany, L. Rajter Prize in Pressburg, Aida Stucki Prize in New York which was gave him by Anne-Sophie Mutter and the City of Toronto International Glenn Gould Protege Prize, after the recommendation of Sir Andre Previn.

In 2018, Roman Patkolo was awarded the OPUS KLASSIK prize as the best instrumentalist of 2018.

He did appear also in the TV-shows, among others at „Stars von morgen“ or „Sunday nights classics“ in duo with Maxim Vengerov.

By the initiative of Anne-Sophie Mutter, the contemporary composer personalities such as Sir Andre Previn, Wolfgang Rihm, Sebastian Currier and Krzystof Penderecki are composing new  duos for violin and double bass. In 2007, Anne-Sophie Mutter and Roman premiered the Sir Andre Previns double concerto for violin and bass in Boston under the conduction of composer himself. In 2011, they premiered the W. Rihm and K. Penderecki duos and in 2013 the S. Currier duo.